Sunday. Our second and final day in Colorado. So many things that we wanted to do.. so many things we did not do. Two days is NOT enough. For sure!

We did not get out of the house until pretty late. After eating breakfast, which is something I usually do not put that much effort into on vacations, we decided to check out the Red Rock Amphitheater. 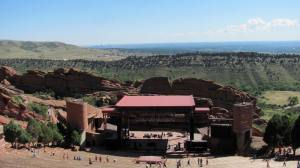 Brian lived in Colorado for a while years ago. He told me watching concerts there during rain and thunderstorms is the best. It is open to the public for free when there is no show. The stage is not accessible if a show is setting up, though. There were a lot of people using the place to exercise. Definitely a great idea to check it out. I want to see a show there someday.

We FINALLY made it to Rocky Mountain National Park. I had been there
years ago, but wanted new memories. Zipping through Estes, we got to
the park pretty quickly.

There were signs saying that there was no more parking near the hike and a shuttle is best. We parked in a lot and grabbed a shuttle.! Naturally, there was a ton of parking at our stop, but the shuttle did not take that much more time than driving.

We went on the awesome hike that includes the lily pads on Nymph Lake
and the stunning Emerald Lake seemingly unreal Dream Lake.

Time was not our friend. Unable to do any more activities, we zoomed
back for an AMAZING dinner, knowing we will return someday.