In the early 1900s, mail carriers flew small planes across the country. Aviation arrows were placed along the route across the USA to help the pilots safely find their way. Many of these arrows are on private land, but there are some that are on public land that you can visit!  I am not entirely sure how to know which are on public vs. private, yet. There are a few sites out there that help find them all, but it is up to you to research which you can actually see.

On the day we arrived in Utah, my boyfriend, Brian, and I attempted to see one that was possibly on private property. Since it also happened to be really hot outside, my interest waned quickly. I didn’t want to start hiking uphill just to find out we weren’t allowed to go farther. We skipped that arrow so we could go off to Zion. Saving that one for the next time.

Determined to visit a cool piece of history, Brian found another arrow that we could attempt to see at the end of our trip, on our way back to SGU.

The aviation arrow he found is up atop a hill in a suburban enclave.

We started up the dirt hill in the hot sun. There was not much of a path when we went, but it may not be the case now. There were some parts that I got concerned about since we also had to walk back down. Slippery dirt and all. Also, I wasn’t super excited about getting completely sweaty before a flight, but persisted. I was excited that Brian was so determined to see the arrow because that forced me to climb. This was not the easiest hike, but also not the most awful, in the end. I think I was slightly panicked about making our flight and therefore felt like the hike was harder than it was.

Finally, we got to the top and saw the arrow. There was a guest book, which was really neat since I have never done any type of hike or activity that had one.

I am very glad we put forth effort to see this incredibly cool piece of American history. We hope to be able to see as many as possible. It is a great idea to plan a whole trip around, actually. Pick an arrow and explore the whole area around said arrow. 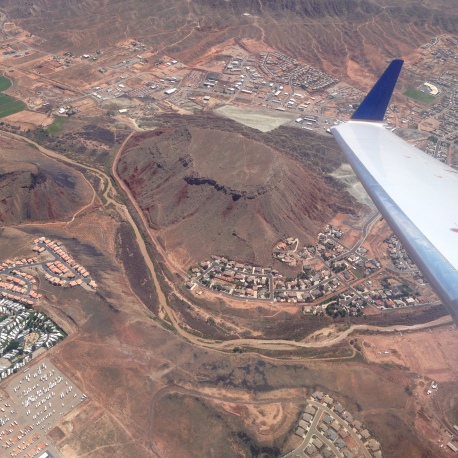 “Thanks for helping my planecestors, arrow!” said the plane. 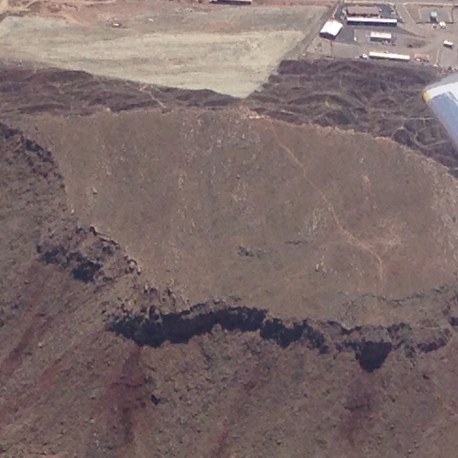 You can see the arrow at the top of the hill. It is realllly tiny in this picture.

I pretty much whined about possibly being late for our flight for the entire hike. SGU is a really small airport. We returned the car and were at the gate in probably 10 minutes. I am such a baby sometimes.

A cat got loose on our plane.

A few years ago, I won a contest to Zion from A to Zion. Since the server this blog was on was not working, I never did finish posting about the trip.

Brian’s and my flight was delayed from Denver, so unfortunately, we lost a few hours on our first day in Zion. The shuttle from the airport costs way more than renting a car, so Brian and I opted for the wheels from Alamo. St. George has a nice and small airport so finding the car rental was a cinch.

I have a fascination with aviation arrows and knew there were some around St. George. Though I had a map printed out, we were unable to find the first arrow. We weren’t sure if the land was private or not and didn’t want to risk trespassing. Also, it was really hot out, so we postponed that search so we can get to our hotel, Flanigan’s Inn, in Springdale.

I cannot say enough nice things about this place. The staff was extremely nice. The room was lovely, clean and comfortable with a balcony that had an out of this world view. AND. . . it is the closest hotel to the entrance of Zion National Park. They were kind enough to leave me this lovely note and gifts.

We threw down our luggage and got right into our hiking clothes to hike Emerald Pools, since it is an easy hike.

I have been to Red and Bryce Canyons, but Zion quickly rose to the top for me. The deep red and browns, with perfect fluffy clouds made for an almost out-of-body experience. It felt like a nature-Disneyland. So beautiful, that I had wished the sun would not go down. Utah, for the win.

On the hike, there was a little girl that kept clapping her hands together, yelling at her Dad, “CHOP CHOP!” Pretty funny. Then we passed a gaggle of girls that were all talking at the same time, with not one actually listening to the others. I don’t miss being that young. Then we got to the waterfall! Everyone loves a waterfall!!!

For dinner, we went to the Spotted Dog at Flanigan’s Inn, which I definitely recommend. The dinner was outstanding. They played Nora Jones, so she will forever be associated with that pleasant evening. I really like getting stuff for free and the dinner was included in my winnings.

The next morning, I woke up very early so I could walk up to the labyrinth to see the sunrise. Yes. Flanigan’s Inn has a labyrinth!!! I went up alone and enjoyed the silence as the sun arose. (Their labyrinth is flat on the ground and not like “The Shining.”) I spent quite a while there since I knew there was NO way Brian was going to be awake yet. Then I had to walk down. It is not a tall hill, by any means, but when I realized that snakes like sunrise, too, it became the longest walk ever. No snake sightings, though. I have never actually seen a rattle snake in the wild and am hoping to keep it that way. 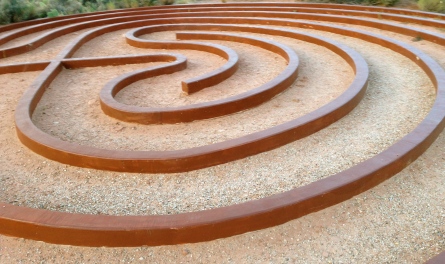 We fit in two hikes that Tuesday. Neither required a permit and were both fairly easy and not too lengthy. Per weather.gov, I knew it was going to rain, so we hoped to get the hikes in before it was to start in the later afternoon. 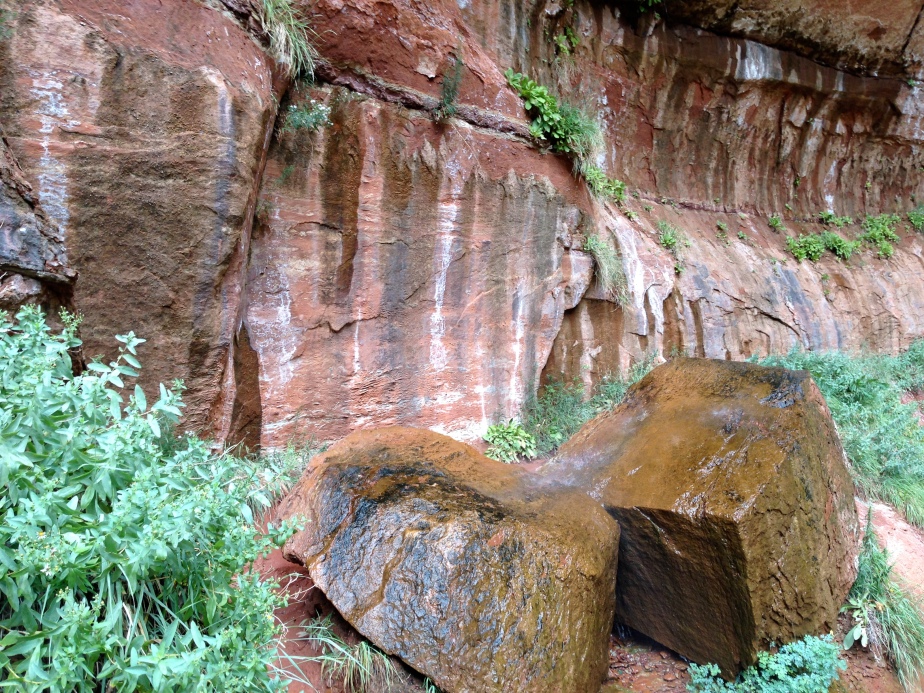 The first one we did was Weeping Rock. Gorgeous, with water seeping out of the rocks above. GORGEOUS! 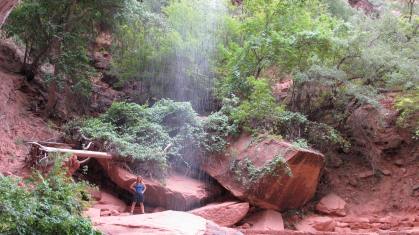 The second was the Riverside Walk, which is a very simple walk that leads to the Narrows. As we were walking, the sky made it clear that it was ready to spout upon all of the hikers. Parks are always extremely clear about dangers within and Zion was sure to have warnings about lightning and flash floods. So, when we found ourselves right by a river with no safe cover when the torrential rain began to pour, I may have been a bit panicky. We started to walk back quickly as the drizzle began, and I kept believing we wouldn’t get wet, but, as I became more and more drenched, it became more and more fun. We were in hiking clothes so who cares how soaked we got? It was exhilarating and romantic. Also, cold. Wet clothes can definitely get cold. 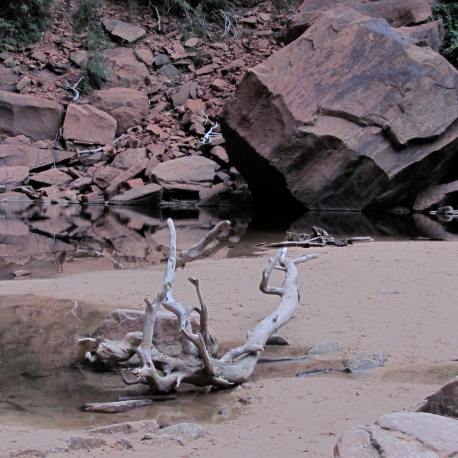 We snagged a shuttle back to the entrance, where we had tickets to see a movie about Zion.

The movie was weird. Just weird. It was a story about the evolution of people dwellers in Zion and hmm. Sure. So, when that was done, we got massages, available at Flanigan’s Inn, which is always a nice perk. The rain had finally stopped, so we thought we were good for the evening.

We had the rental car, but I made us take the shuttle for the fun of it. So, when we first checked in, the front desk told us about the shuttles to/from the rest of the town (on Zion Park Blvd.), and also the ones that are within Zion. I did not remember when the last shuttle back to the hotel was, which proved to be an unfortunate mistake later. Slight foreshadowing: We went to a store across the street and randomly bought water/hiking shoes before we hopped on the shuttle.

Brian and I perused the stores until we needed food. For that, we chose pizza and noodles at The Flying Monkey and sat outside. At a metal table. As we ate, it began to rain again. I got my first ever picture of lightning. I probably took 800 pictures until I got it. We enjoyed the rain and our pizza as we gazed into the street, watching a shuttle go by and thinking nothing of it.

Dinner was finished and the rain was coming down so hard it was kind of opaque. We dashed across the street to the covered shuttle area and waited. And waited. And waited. We called Flanigan’s to ask when the last one would come. Oh, shit. The last shuttle left at 9. The shuttle we watched while eating. Neither of us had paid any attention to how far away our hotel was and it was dark and really stormy. I have no explanation why I did not just look at a map on my phone. I can’t remember if I had reception issues. Let’s go with that. Funny how my mind works. We went to a bar, Wildcat Willie’s, to try to wait out the rain. I ran into the store next door to buy some safety items to get back, like a flash light, ponchos and a bright orange bag so we would be visible to cars. AND.. we had those new SHOES! After I purchased everything, I mention to the store clerk, Spencer, how derp we were and he said if we waited until he was finished closing the store, he would take us back to the hotel. AND THAT is why I love smaller towns. So, Brian and I wait him out with some wine, beer and chips, buying a brownie for Spencer as our thank you. Finally, I go to Google to find out how far away our hotel is…. When Spencer was done, we hopped into his car and arrived at our hotel in less than 5 minutes. But, at least we have a cool bright orange bag that we now bring with us on every trip. The most important thing in it now is the wine opener.