Recently, my brother, Don, visited me in Los Angeles. We started off the week by trying the Top Chef winner Michael Voltaggio’s ink.sack on Melrose Avenue. Delicious and

inexpensive food! We were both very stoked.  My brother is a foodie and always has a list of restaurants he wants to try when he is in town. His choices never fail!

Next up were Make Music Pasadena and the Pasadena Chalk Festival. I don’t know if the music fest will be an annual thing, but it was pretty neat. There were a whole lotta bands. I won’t even lie and pretend I had a clue who any of them were. I had heard of Dengue Fever because their song One Thousand Years of a Tarantula was placed in a season finale of the show Weeds. It was a pretty awesome ending. We watched Dengue perform and then moved onwards to the food trucks around the corner so my brother could enjoy Nom Nom and I could nosh on a sandwich from the Lobsta Truck. Also there were the Grilled Cheese and India Jones trucks, but I can hit them up another time!  All of them have awesome food, I must say.

After dinner we were off to Dodger Stadium. It took us no time to get there from Pasadena.

What took forever was getting INTO the stadium. Geesh! The White Sox were in town playing the Dodgers.  We won!  Seeing baseball with my brother rules! Dodger Stadium is the 3rd oldest ballpark in Major League Baseball. Pretty cool! One odd thing was the organist played “Alone Again.” It’s weird, right? The other odd, but VERY LA thing is the special parking for Lexus owners.

Since you know you are wondering, I’ll tell you: There were no incidents at all at the stadium. Everyone was well behaved and nice so don’t let the very unfortunate incident last year keep you from checking out the ballpark!

A few days later, we had dinner at Sweetsalt in Toluca Lake. Another Top Chef find by my brother. Service was amazing! Food was incredible! AND and and and … they have Macarons!! Holy S***!! I definitely scared the staff with my cookie obsession thing.

Finally, we hit an Angels vs. Giants game at Anaheim Stadium with another friend of mine.

I love going to that stadium. It’s so efficient to get in and out!! Plus, the White Sox are usually there when they are in town, so I have learned to love that place.  And it was a great game!

The next weekend, my cousin, Lisa and I went whale watching with Newport Landing in Newport Beach.

No whales (I never ever see whales! wah!) but we did see dolphins, which is always cool and we definitely enjoyed the boat ride! Cousin time!

Last, but definitely NOT least was my trip to Wrightwood to enjoy their annual Mountaineer Days. 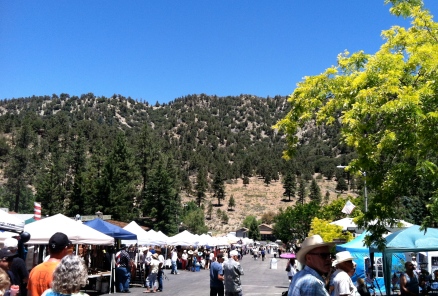 I had a fantasy that there would be a gaggle of cowboys, but knew that wasn’t what it was about at all. It’s a family-oriented event with stage coach rides, rock climbing, gold panning, cowboy reenactment shows, live bands and plenty of booths showcasing businesses in the local community. I talked to a few folks in the Chamber of Commerce booth. They love their town and were hoping I was going to stay a few days. Not this time, but most definitely in the future!  I checked out their local bookstore, Beverly’s Books. Of course, I bought a book called, “The Wild West”.  Buying books everywhere I travel seems to be my “thing.”

The Wrightwood Historical Museum was open, so I popped in to look at all of the pictures they have displayed. I loved the woman that was working inside and made sure to chat her up a bit about the history of Wrightwood. Sumner Wright is considered to be the “Father of Wrightwood,” though he was not the first

person to live there. He ran his family ranch, Circle Mountain Cattle Company and also had an apple orchard! Don’t miss the goodies outside and in the back of the museum!  They have old signs from the town, a 1930s cabin replica and a few other fun things.

The hunger pains finally got me and I meandered down to Joe Mudd’s Pie & Coffee and Guitars, apparently.

I grabbed a sandwich and a fantastic slice of walnut pie to go.

I just had to take the 2 Highway home since I had never explored that way. And holy smokes! I stopped at least 80 million times to check out the scenery.

It’s just beautiful! I took a ton of pictures and totally ate the walnut pie instead of saving it until I got home. oops.

Here is a shout out to a vendor in the video:

The hair pieces on the mannequin heads in the video are by Grace Design (909) 288-8288. She was really nice and the hair pieces were really amazing. Very tempting, but

I’m too lazy to dress up well enough to warrant wearing one. The heads all have names on their necks so people can explain which design they like when they order! She is in Fontana.